I attended Dreamforce for the first time this year. I gave a talk, learnt lots, met colleagues, and made friends.

Back in August, I wrote a blog post to highlight the automatic geocoding feature new to the Summer ‘16 release of Salesforce. Little did I know that I’d be invited to go and speak about it! I had never been to Dreamforce or San Francisco, and was thoroughly excited at the prospect of doing both.

With 171,000 people in attendance, Dreamforce is THE largest software conference in the world. With over 3000 sessions and multiple keynotes based on product areas, I knew for a fact that I wasn’t going to get to attend everything I wanted to. My talk was also taking place on Day 1, so I could spend the next 3 days exploring what Dreamforce had to offer and plan accordingly. I flew in on the Sunday so I got to explore San Francisco a little too (rode the cable car, went to the Golden Gate Bridge, etc). 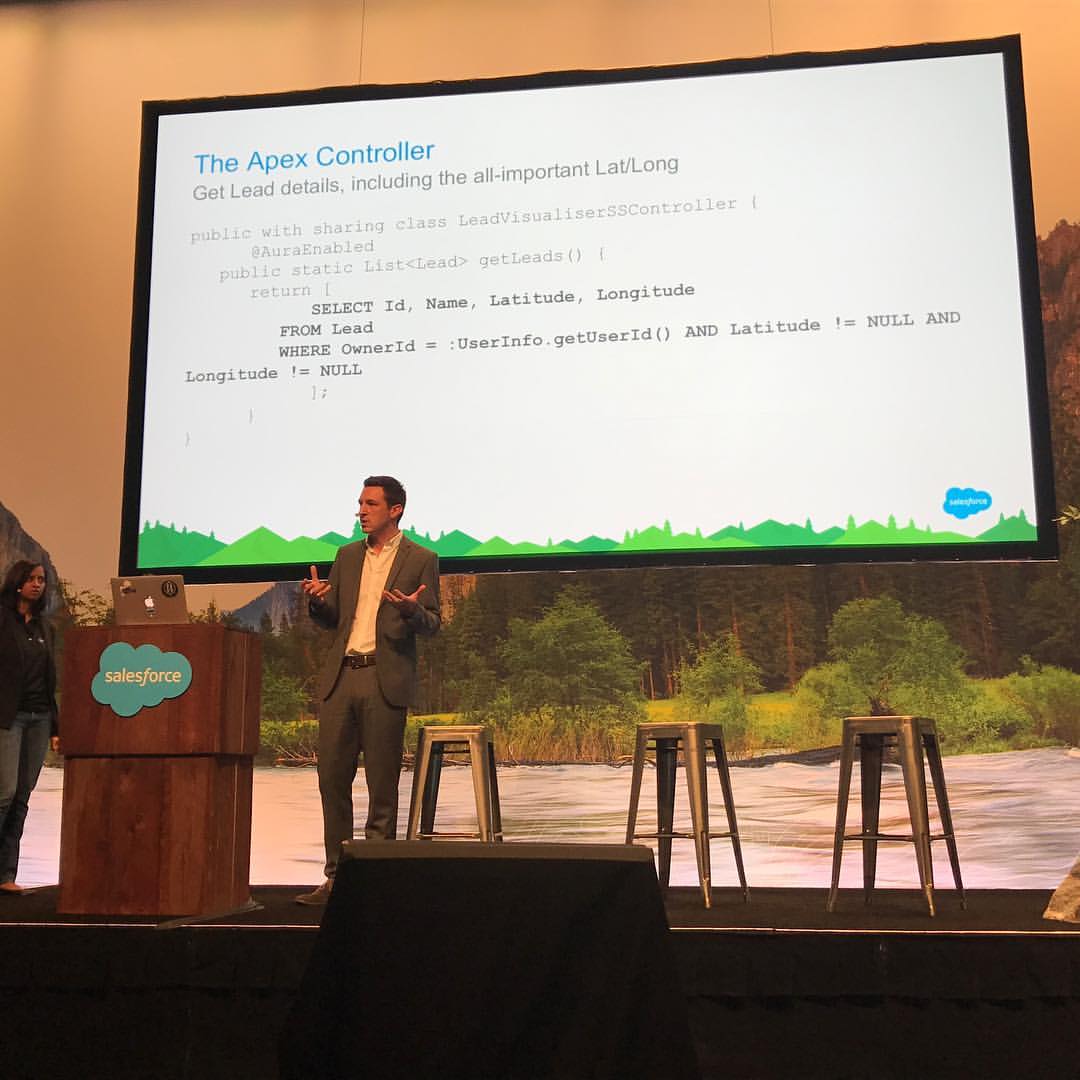 I essentially gave a joint presentation with two Salesforce employees entitled “Make Your Data Location Aware”, which featured and introduction to automatic geocoding, how this can be enabled for existing org data (running the clean rules), and then my portion of the talk, taking the code I’d written to build and demonstrate automatic geocoding in action.

I’d seen Marc give the opening keynote at TrailheaDX (I was watching live from the UK), and was taken by his humble attitude towards what he’s achieved and how he strives to give back, both through the 1-1-1 model advocated by Salesforce and personally through his activism of various good causes, such as (RED). After an introduction from a Hawaiian couple who defined “Ohana” (essentially means “family”), Marc then went into the keynote proper. He spoke with Parker Harris about how Artificial Intelligence (which in the Salesforce platform is called Einstein) is the next evolution of the Salesforce platform. Einstein will be an integral part of every Salesforce cloud, and will bring automatic insights and analysis to help both developers and users be more effective. He also mentioned the Demandware acquisition will now be known as Salesforce Commerce Cloud. I’d expect there to be more news on integration with the rest of the Salesforce platform between now and Dreamforce 2017.

As a techie at heart, I was intrigued to learn what the big announcements would be at one keynote in particular - the Salesforce for Developers keynote. I was most excited to learn about the new Developer Experience, a suite of new tools focussed on making developers much more effective. There’s a new command-line interface for the Salesforce platform, GIT integration for storing and versioning metadata, automation, and the ability to use tools developers love such as vim, Atom, Sublime Text and others. The Salesforce Eclipse distribution will get all of these updates too. The new Salesforce DX is due to take shape in 2017.

I was taken by both Dreamforce for its scale, ability to learn, meet new people and connect with colleagues, and San Francisco itself. What a wonderful city! Friendly people, stunning scenery and amazing vibe. I will be begging to come back next year!